Water is a huge issue in India, whether it’s the melting of the Himalayan glaciers or the devastating impact of many consecutive years of drought on farming communities. The most hotly debated solutions have tended to be the large-scale ones, like the building of large hydroelectric dams along many of India’s sacred rivers. Many of these dam projects have failed to fulfill the grand promises of construction companies and politicians, and have proven disastrous for both the ecosystem and the displaced communities.

What’s proving a far more viable solution are localized, smaller-scale earthworks to capture and use water on-site. Some of you may have seen Indian water conservation activist Rajinder Singh in the documentary Flow: For the Love of Water discussing the traditional method of constructing a rainwater collection pond between two hills. Permaculture folks know about other kinds of earthworks to capture and store water, such as keyline dams and swales, for which Brad Lancaster’s Rainwater Harvesting for Drylands and Beyond is the go-to resource. Swales have proven very effective in projects such as Geoff Lawton’s impressive “Greening the Desert” in the Middle East.

But neither one of these methods is really applicable to the area of Rajasthan where I spent the last few days. Rajinder Singh’s system works in a hilly area, whereas the Laporiya region’s land profile is nearly flat, with only a very gentle and steady slope. As for mud embankments or swales built on contour, Lakshman Singh told me that they don’t work either: while this area of Rajasthan is arid or semi-arid, during the monsoon season they can get heavy rains — say, 100 mm all at once — and in many cases the water has broken through the embankment, causing flooding and washing away topsoil. To address the water scarcity in his area, he developed an innovative system, which he called the chauka. 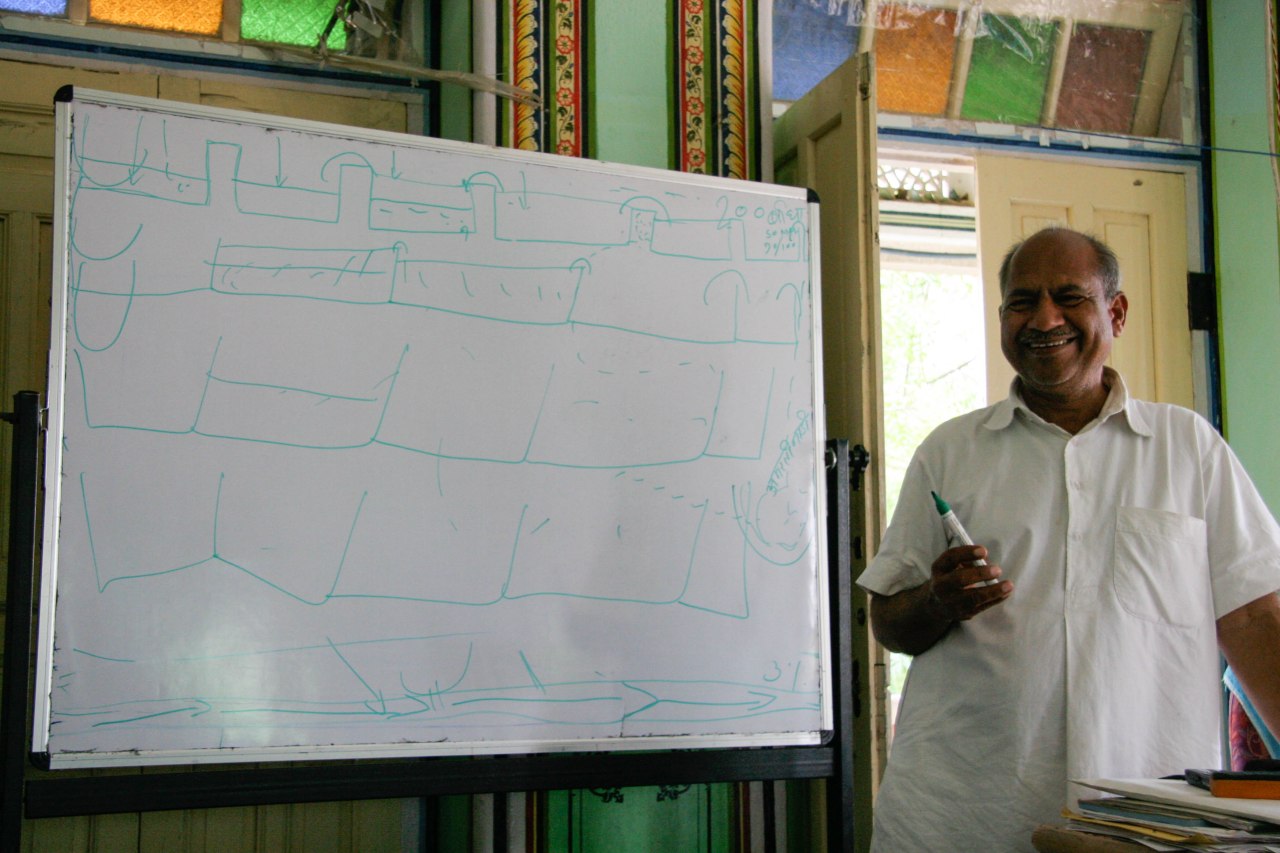 A chauka is a rectangular enclosure surrounded on three sides by earthen bunds or embankments. In a chauka system, series of these rectangles are constructed in a checker-board pattern across a natural slope and connected with shallow canals. The embankments intercept the runoff rainwater and collect it at the “down” end of the bunded field. During heavy rainfall, the water moves gradually from one chauka to another, which gives it more time to seep into the ground. 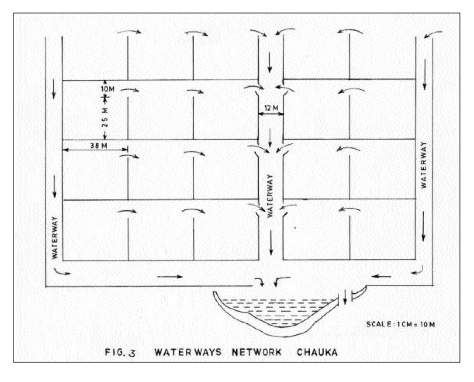 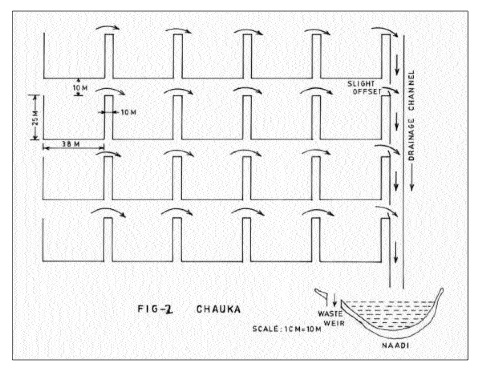 The embankments are constructed out of soil dug out of smaller rectangular or square borrow pits within the chauka. As an added benefit, these pits allow the water to infiltrate the soil even more effectively.

A mature chauka, covered with green grass. This is fantastic grazing land!

The chaukas are built uphill from the village and its ponds and wells. The water collected in the chaukas replenishes underground water aquifers, gradually feeding the ponds and wells. Any above-ground overflow is directed to the village ponds via canals. The image below — from the “Chauka Manual” that GVNML developed in collaboration with UNICEF — illustrates how an ideal chauka system works in the landscape: 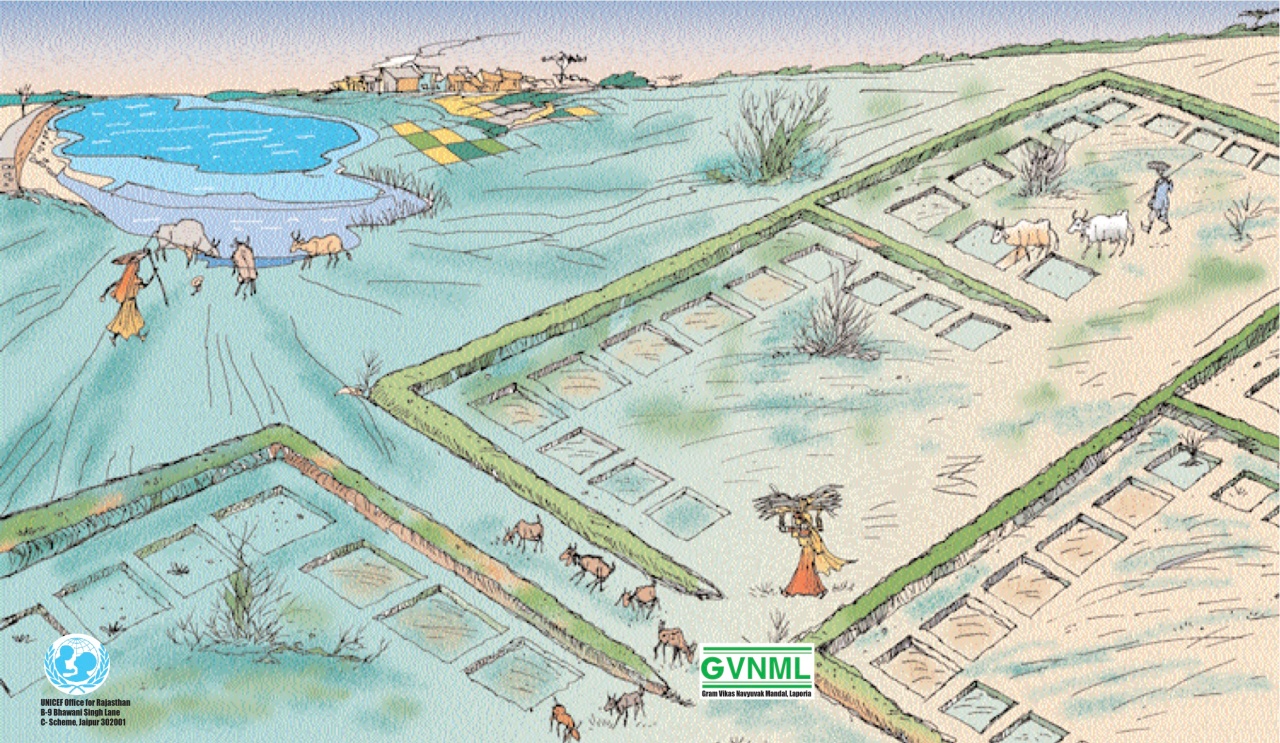 The entire area is then overseeded with grass and fodder tree seeds. The resulting pastureland ecosystem is incredibly diverse. There are now over 30 types of grasses in the pastures, many of them with medicinal qualities so the livestock’s health is good. The biodiversity has also attracted innumerable bird species, including ones that are near-extinct elsewhere in Rajasthan.

Do chaukas work well everywhere? No. This system is particularly well suited for:

GVNML’s success has convinced the state government of Rajasthan, which now encourages communities throughout the state to adopt the chauka system. Delegations from as far away as Afghanisthan have come to Laporiya to study GVNML’s water conservation methods. The chaukas could be a viable alternative in any pastureland regeneration process in arid and semi-arid regions elsewhere in the world as well, for example in many parts of Australia, Africa or Southwestern United States.

4 thoughts on “The Chauka system: An innovative method of water harvesting”